The History and Resurgence of Wax Seals 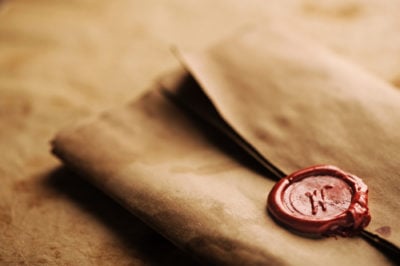 For those who still practice the art of handwritten correspondence, wax seals are a popular way of adding a finishing touch to any letter or greetings card.

The history of seals can be traced back to some of the earliest known civilisations. Actual examples have been found from the Indus Valley and Mesopotamia civilisations, which were active from 3300BCE and 150BCE respectively. The first seals were made from clay and impressed using rings or cylinders.

The usage of wax in seals did not take place until the Middle Ages. Originally used only by eminent individuals such as bishops, monarchs and royal spokespeople to authenticate documents, by the 13th century wax seals became more widespread and were being used by monasteries, guilds, aristocrats and eventually common folk.

Each seal would be unique to its owner and would often be used in place of a signature due to widespread illiteracy during the 13th century. Wax seals were occasionally stamped directly on a document, but more common was for them to be stamped separately and then affixed to the bottom of the document with a ribbon, cord or strip of parchment.

During this period the wax was generally made using 1/3 resin and 2/3 beeswax, though in later years beeswax was completely omitted. Eminent figures would often use a more expensive material for sealing documents; the Pope, for example, would use a type of lead called bulla, from which the term ‘papal bulls’ is derived.

In nearly all cases the wax was pressed with either a handheld seal or a specially-made signet ring. Wax rings, which were used as far back as ancient Egypt, were also used as a symbol of status and power. Throughout history, high-ranking members of the church and other aristocratic individuals would often require a visitor or diplomat to kiss their signet as a sign of submission or allegiance. When the owner of a signet died, the ring would generally be destroyed so as to prevent forgeries.

By the close of the Middle Ages, wax seals became more popular in private correspondence, particularly as emigration, colonisation and other necessities forced travel to become more widespread. Despite the world being more accessible than ever, by the mid-19th century having a letter sent came at a very high cost to the sender. The cost of postage at this time was also based on the number of sheets, as opposed to the overall weight; this meant that it was cheaper to fold a parchment and seal it closed, rather than use an envelope, which would have added to the overall cost. At this time, envelopes were considered a luxury afforded only to the rich.

By the mid-nineteenth century, envelope manufacturing took a more modern twist as specially designed machines streamlined the production process, leading not only to more affordable envelopes, but pre-gummed envelopes. The result was a decline in wax sealing – a decline that continued until a recent resurgence.

Wax seals have become what could be described as a post-modern form of correspondence – we are all aware that they are a historical mode of sealing letters, yet it is that outdated, distinguishing mark of a bygone era that makes them so appealing. And anyone who has received wax-sealed correspondence will certainly attest to the added excitement that comes from opening it.